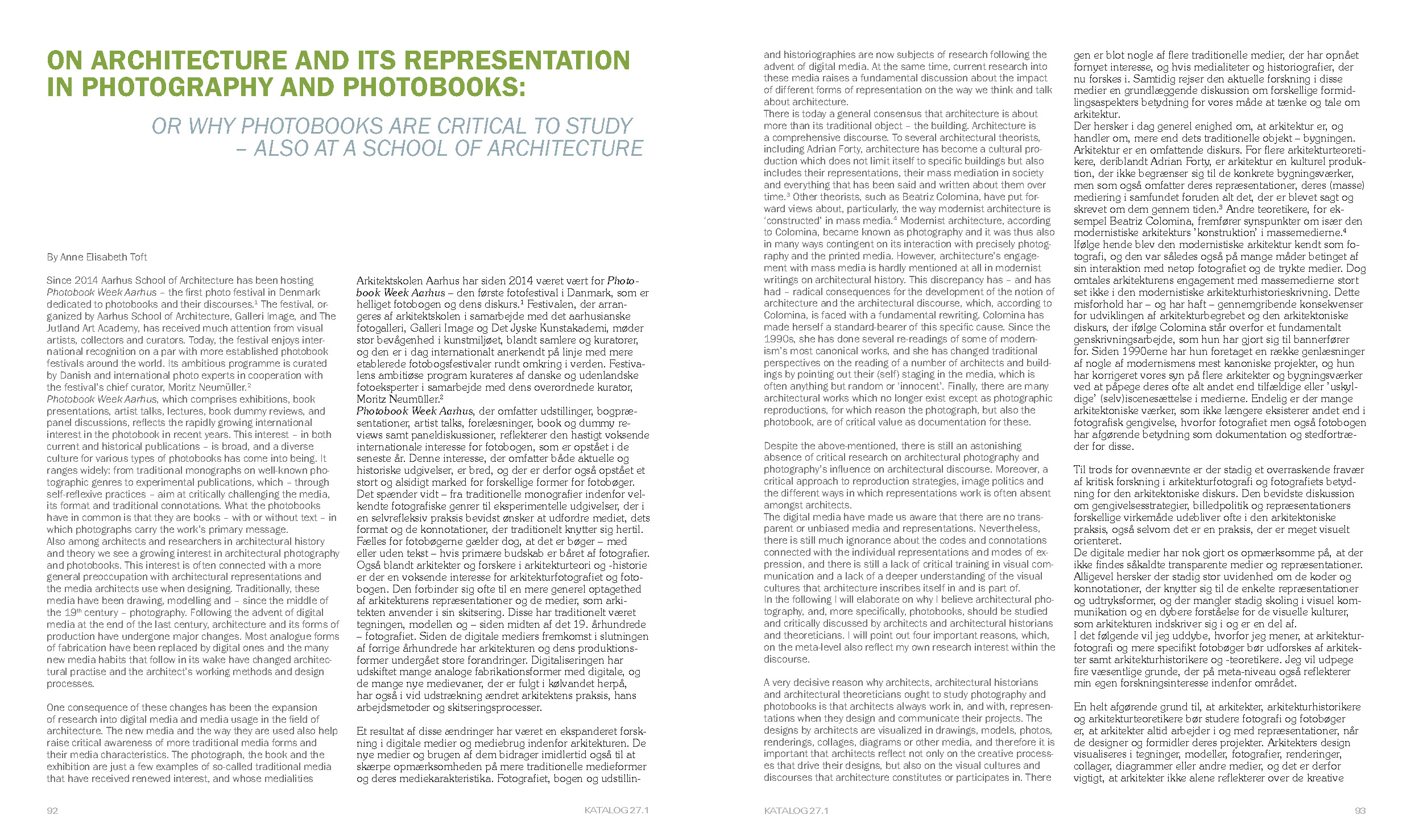 On Architecture and Its Representation in Photography and Photobooks

The following text was published by KATALOG Journal of Photography and Video 27.1, 2016, pp. 92-96, and was written by Anne Elisabeth Toft – kindly made available to our readers by Katalog’s editior, Jens Friis.

On Architecture and Its Representation in Photography and Photobooks

Since 2014 Aarhus School of Architecture has been hosting Photobook Week Aarhus – the first photo festival in Denmark dedicated to photobooks and their discourses (1). The festival, organized by Aarhus School of Architecture, Galleri Image, and The Jutland Art Academy, has received much attention from visual artists, collectors and curators. Today, the festival enjoys international recognition on a par with more established photobook festivals around the world. Its ambitious programme is curated by Danish and international photo experts in cooperation with the festival’s chief curator, Moritz Neumüller (2).

Photobook Week Aarhus, which comprises exhibitions, book presentations, artist talks, lectures, book dummy reviews, and panel discussions, reflects the rapidly growing international interest in the photobook in recent years. This interest – in both current and historical publications – is broad, and a diverse culture for various types of photobooks has come into being. It ranges widely: from traditional monographs on well-known photographic genres to experimental publications, which – through self-reflexive practices – aim at critically challenging the media, its format and traditional connotations. What the photobooks have in common is that they are books – with or without text – in which photographs carry the work’s primary message.

Also among architects and researchers in architectural history and theory we see a growing interest in architectural photography and photobooks. This interest is often connected with a more general preoccupation with architectural representations and the media architects use when designing. Traditionally, these media have been drawing, modelling and – since the middle of the 19th century – photography. following the advent of digital media at the end of the last century, architecture and its forms of production have undergone major changes. Most analogue forms of fabrication have been replaced by digital ones and the many new media habits that follow in its wake have changed architectural practise and the architect’s working methods and design processes.

One consequence of these changes has been the expansion of research into digital media and media usage in the field of architecture. The new media and the way they are used also help raise critical awareness of more traditional media forms and their media characteristics. The photograph, the book and the exhibition are just a few examples of so-called traditional media that have received renewed interest, and whose medialities and historiographies are now subjects of research following the advent of digital media. At the same time, current research into these media raises a fundamental discussion about the impact of different forms of representation on the way we think and talk about architecture.

There is today a general consensus that architecture is about more than its traditional object – the building. Architecture is a comprehensive discourse. To several architectural theorists, including Adrian Forty, architecture has become a cultural production which does not limit itself to specific buildings but also includes their representations, their mass mediation in society and everything that has been said and written about them over time (3). Other theorists, such as Beatriz Colomina, have put forward views about, particularly, the way modernist architecture is ‘constructed’ in mass media (4). Modernist architecture, according to Colomina, became known as photography and it was thus also in many ways contingent on its interaction with precisely photography and the printed media. However, architecture’s engagement with mass media is hardly mentioned at all in modernist writings on architectural history. This discrepancy has – and has had – radical consequences for the development of the notion of architecture and the architectural discourse, which, according to Colomina, is faced with a fundamental rewriting. Colomina has made herself a standard-bearer of this specific cause. Since the 1990s, she has done several re-readings of some of modernism’s most canonical works, and she has changed traditional perspectives on the reading of a number of architects and buildings by pointing out their (self) staging in the media, which is often anything but random or ‘innocent’. finally, there are many architectural works which no longer exist except as photographic reproductions, for which reason the photograph, but also the photobook, are of critical value as documentation for these.

Despite the above-mentioned, there is still an astonishing absence of critical research on architectural photography and photography’s influence on architectural discourse. Moreover, a critical approach to reproduction strategies, image politics and the different ways in which representations work is often absent amongst architects.

The digital media have made us aware that there are no trans- parent or unbiased media and representations. Nevertheless, there is still much ignorance about the codes and connotations connected with the individual representations and modes of expression, and there is still a lack of critical training in visual communication and a lack of a deeper understanding of the visual cultures that architecture inscribes itself in and is part of.

In the following I will elaborate on why I believe architectural photography, and, more specifically, photobooks, should be studied and critically discussed by architects and architectural historians and theoreticians. I will point out four important reasons, which, on the meta-level also reflect my own research interest within the discourse.

As mentioned, there has only been relatively little research into the relation between photography and architecture – including how architects use photography in their design processes. Even less research has been made on photobooks, which specifically deal with architecture, and almost nothing has been written about the historiography of the architectural photobook, its culture-historical meaning and its different stagings of architectural representation. Even though architecture has been a favoured motif for photographers since the middle of the 19th century, architectural photography is still, in research-related contexts, an overlooked or marginalised genre, which is often overshadowed by more popular genres, as, for instance, portrait and landscape photography.

Another important and obvious reason why architects should study photography is that many people’s primary experience with architectural works is through photography. We often share a collective memory on specific places and cultures which only exist in photographs, and which we can therefore only access through this medium. This also means that our understanding of architecture and the concept of architecture, as well as our understanding of the architectural and urban experience is, to a great extent, constructed on the basis of readings of representations. Since the middle of the 19th century photography has been the medium through which most people encountered the representation of architecture. Photography might be the strongest visual medium of all: it dominated the visual culture of the 20th century, and even today, after the emergence of many new visual media, it is an absolutely crucial medium in society. The book is arguably the most important context for photography. It is one of the earliest formats for presenting photography, and it represents photography in a broad manner. There are consequently also many architectural photographs which today only exist as reproductions in books, which makes these books invaluable from a culture-historical point of view.

A third reason is that photography is a democratic medium, and, today, when virtually everyone has a camera in their mobile phones, there is hardly anyone who does not have the opportunity to take photos. We all take photos and photograph all the time. Photography has become an integral and natural part of our lives. We document and stage our lives while photographing, and many theorists consider photography a self-reflexive practice that connects us with other people, and through which we understand ourselves and our lives (5). The practice of photography makes us all auteurs – we all become ‘artists’. We are also our own curators: we understand our lives and our relationships through the way we organise, distribute and archive our photos – in the 20th century this was predominantly in our private photo albums; today, it is something which we do on facebook or on other image-borne media platforms. Today, everyone can take a photo and have an opinion about it. No special skills are needed. Taking photos is fast, easy and inexpensive, and this is also one of the reasons why photography is an important medium for architects in their work. Digital technologies have made it easier than ever before to layout and print books in high quality and small runs. This is probably a major reason for self-publishing and zines having become common phenomena that ever more people are beginning to experiment with.

The fourth reason relates to a number of epistemological questions raised by the teaching of architecture, architectural history and architectural theory. As someone who teaches architecture, I am concerned with these questions, which are basically about the way teaching is carried out and with what constitutes this teaching and its form. For instance, what is the influence of specific learning environments and practices on the way educators and students understand and define architecture and the concept of architecture? furthermore, how do different teaching formats, methods and discourses, languages and language systems affect the knowledge production in teaching? In the context of teaching architecture, photography and photobooks have always been essential since their advent in the 19th century – as were slide lectures in the 20th century and as are, today, PowerPoint presentations. Architecture, architectural history and architectural theory are traditionally taught using different visual media and representations. This is why educators and students ought to turn their attention to this phenomenon and critically reflect on how different representations and media work and what they mean to the reception and perception of architecture.