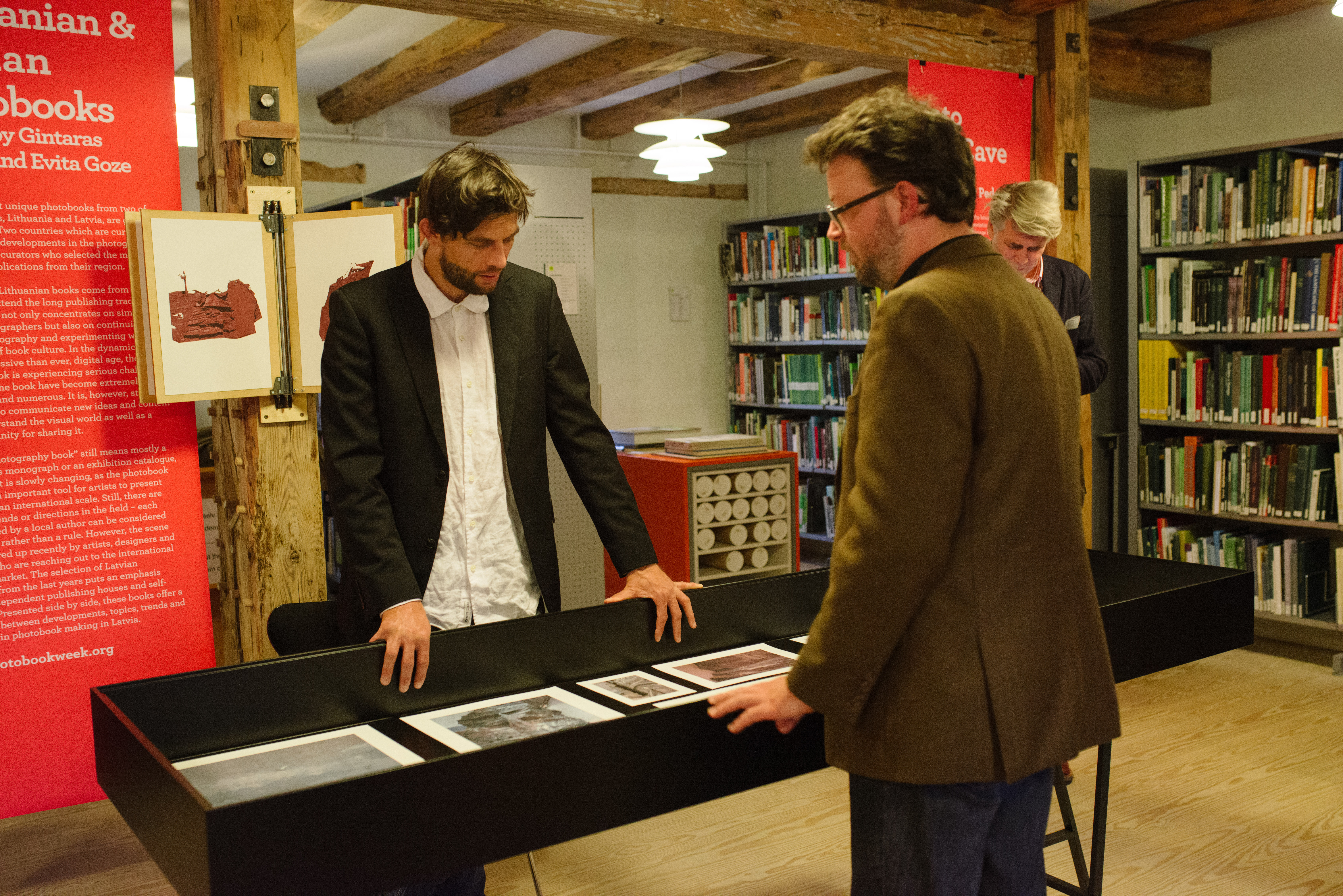 Impressions from the 2018 Photobook Week Aarhus, by Kasper Lægring

Spaces for contemplation, spaces for interaction

The photobook has the unique ability to act as a nexus for bringing together photographers, collectors, publishers, curators and the public at large. Nowhere was this inclusivity more evident than at this year’s Photobook Week Aarhus, where the programme gave equal attention to each of these groups that are all vital parts of a cycle of production, distribution and appreciation.

The heterogeneous nature of the festival was emphasized further by its multitude of venues, spanning from large environments, such as the art museum, the cultural centre and the school of architecture, to much smaller spaces, such as galleries, bookshops and design shops. Because of the physicality of the photobook, and because of the medium’s wide range of aesthetic expression, this variation of spaces for exhibitions and debates is a major advantage, as it allows both for more distanced enjoyment of curated specimens, and for more random tactile interaction with the books. Too many ‘please do not touch’ signs would not serve this composite medium well, as it comes in many sizes and shapes to be perused or admired, from mass-produced guidebooks to rare collector’s items.

Sometimes the confrontation with curatorial work can feel like a one-way conversation, but with the official participation of passionate private collectors and connoisseurs such as Gerry Badger, David Solo, Thomas Wiegand, and many more, Photobook Week Aarhus managed to support a truly participatory atmosphere for the visitor. It is indeed “an open forum around the photobook”, as the festival’s motto announces.

Virtual reality and hyperrealism in and out of the photobook

Being mainly a theorist working at the intersection of architecture and visual culture, my role in all of this was to take part in a panel debate on the cultural implications of the festival’s leitmotif: The Virtual and the Physical. The mediation of architecture through the photobook is already a complex question as it is, but what happens when the photographic raw material for the book is no longer ‘real’, but based on virtual reality and manipulations of reality instead? This exciting discussion took off from passionate presentations by Frederik Petersen, an architect and photographer, and by Michel Huneault, a documentary photographer with a background in international development work. Our discussion built upon the exhibition Into the Cave, curated by the architect and researcher Claus Peder Pedersen.

Petersen’s artistic mission centred on the creation of uncanny photographs in which something, often tiny details or features at the periphery easily overlooked, was slightly off. The subject matter of his photographs would often be environments that are in themselves artificial representations, and often hyperrealistic in character. For instance, his photograph of a diorama exhibition in a natural history museum is carried out in such a way as to expose the shortcomings of the dioramic technique employed – in other words, the spectator of Petersen’s work would be facing a double mediation, albeit one highlighting the very collapse of credible representation in the original tableau.

Huneault’s practice was quite different, having evolved over the years in response to particular events in his native Québec. The Lac-Mégantic rail disaster in 2013 became the subject matter for his first photobook, The Long Night of Mégantic/La longue nuit de Mégantic, but in his most recent project, on asylum seekers crossing at the Roxham section of the US-Canada border, he had moved beyond photography and wanted to recreate these incidents by every means possible: text, sound, image, and even virtual reality effects to enhance the narrative and make it more convincing.

Whereas Petersen was aiming at creating awareness of technology as an agent of mediation, tapping into an established artistic practice of creating images with a double code, Huneault seemed more preoccupied with phenomenological recreation of particular events and settings. In fact, both photography and the photobook as a medium seemed to matter less to Huneault than the faithful recreation of a particular lived experience at the US-Canada border. Technology was merely instrumental in this re-enactment process, it seemed, for Huneault never indicated what importance he would like to see assigned to the various media employed in his reconstruction of social reality. In short, in spite of immersion and seduction being key themes in contemporary discourse on visual culture, his project was not guided by a reflection on the role of representation and media, but on a desire to make the audience feel and experience a situation ‘as it really was’. I was not alone in calling into question the merits of such a documentarist approach in times like these, where manipulating our very perceptual apparatus has often become integral to commercial and artistic strategies alike. Therefore, Petersen’s photographic strategy, in spite of being quite traditional in some respects, seemed far more in contact with contemporary concerns about the distortion of reality than Huneault’s documentarist desire.

Not long ago, we were told that traditional visual media, such as artistic photography and the photobook, were doomed, being rendered obsolete by the democratisation of the image through widespread digitalisation. In the era of Flickr and Instagram, what was to become of the carefully composed photograph and the exquisitely crafted photobook? For me, one of the major lessons learned from this year’s festival is that the photobook is not only very much alive and kicking, but might even have benefited from this much-discussed democratisation of high-end media. For many of the works displayed in Aarhus – Harvey Benge’s selection of photobooks from New Zealand, for instance – have been made possible by easy access to publishing, low production costs and accessible distribution networks. In addition to this development, it was also evident that, due to the bombardment of cheap visual stimuli that we are exposed to on a daily basis, the niche market for the photobook has only become more attractive, not less. It thus seems that, as a medium, the photobook flourishes at the moment due to the paradox of becoming simultaneously more marginalised and more accessible on a global scale. These tendencies bode well for the future of the photobook and for Photobook Week Aarhus as an enduring and stimulating setting for these discussions.

Kasper Lægring is an architect and the former blogger & opinion maker at the Danish Architectural Press.